Our Philosophy Towards Life

No products in the cart.
0
Home
0Wishlist
AccountClose
Search Close

Our Philosophy Towards Life 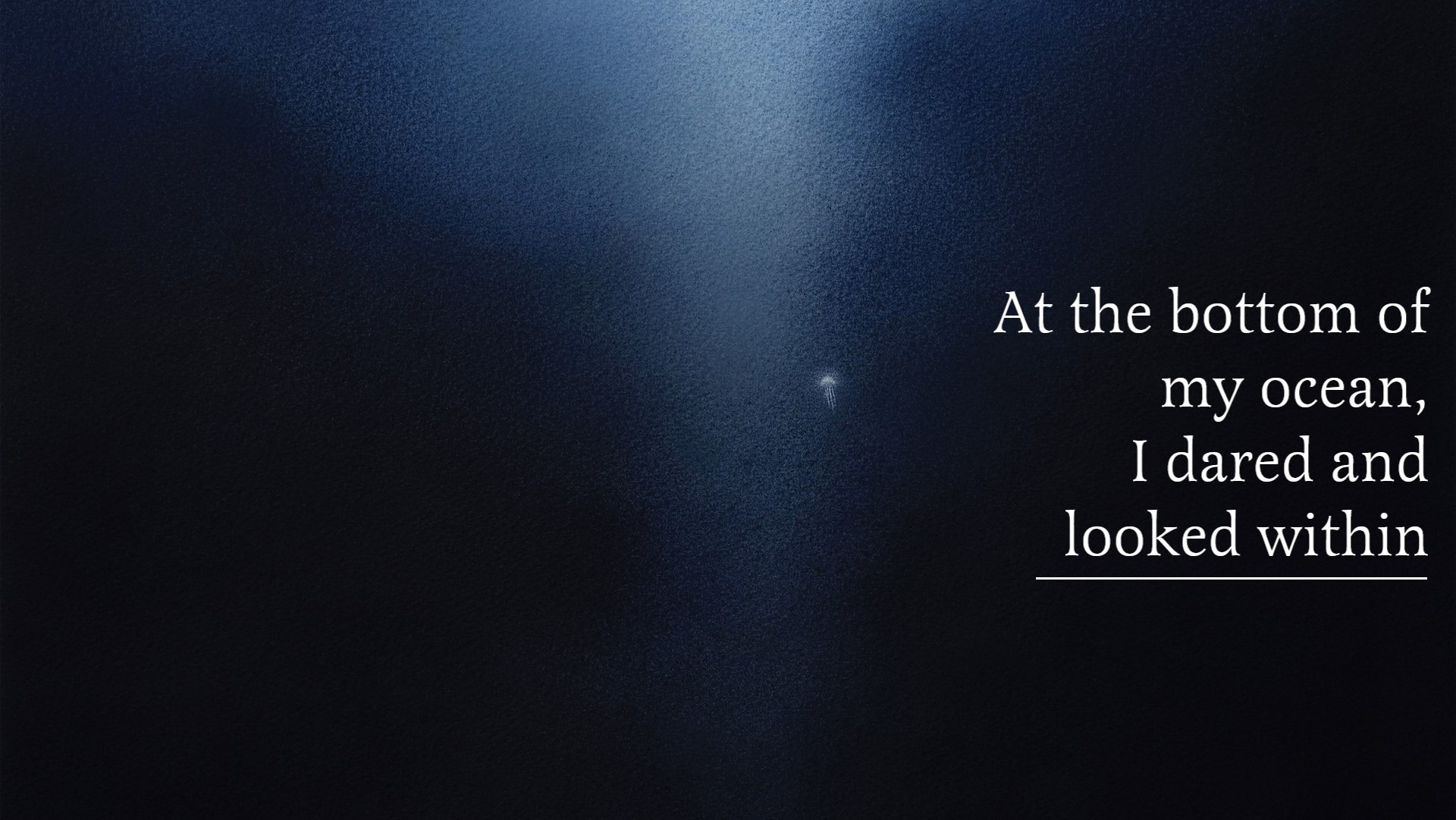 “At the bottom of my ocean, I looked about and couldn’t see,
Found no one nor thing to salvage me,
At the bottom of my ocean, I dared and looked within,
Found, in my own darkness, a seed of pure force burning,
Drawn by it’s gravity, this unquenchable force, I tapped in,
Utterly undramatic, my confusions clear,
Still mired in misfortune, saw serenity in struggling,
Yet am up again, I move upward, clawing
Renewed through you,
My Courage.”

While on our journey with all it’s highs & lows, the setbacks, the achievements, the exhilaration and the disappointments, we certainly have learned quite a few fundamental lessons about life over the years. Much more so than when we started out over 9 years ago.
If we were asked to zero in on the most important learning or insight from our experiences and one that has been equally the most personally meaningful to us, we would try to define something that isn’t often spoken about in today’s loud and highly connected world.

Only for a chosen few?

The word courage can hold different meanings for different people. By and large when we try to define courage, most of our minds jump to picturing grandiose acts of bravery and valour, performed by a chosen few, who were likely born special, which in turn leads us to believe that some people are simply born with courage and others are not.

A fireman going into a burning building to save a trapped child, the brave explorer navigating the thunderstorm in a raft through uncharted waters, the athlete attempting a physically risky move on the field while 50,000 fans gasp in silence and anticipation, the paratrooper about to jump out of an airplane to land straight into a warzone, the public speaker about to walk out to the podium to debate for a cause that affects millions, the hero in a movie who battles the forces of evil alone, saving millions of lives and so on.

Whether in fiction or reality, this kind of courage is out and out and does not need any secondary testimony. It is self-evidently true. Anyone who witnesses these acts will instantly draw the conclusion that these acts can only be performed by courageous individuals and others would unanimously agree. Another thing that everyone would unanimously agree upon, is that these individuals play a valuable role in society, it’s well-being and its ultimate progress. There is no question that these are special people indeed.

But are they the only ones who are special?
What about every day, ordinary people? Do they live lives like these?

These are all powerful acts of courage. But one could argue that they are too grandiose in nature for the ordinary individual. Most everyday people do not get to or choose not to live as intense a life, such as the aforementioned brave examples. But does that mean that every-day ordinary people are not courageous?

At least, we do not think so.

Our most important ally

As we attain growth and maturity, many of our ideas, definitions and beliefs about life are revised. This includes our ideas about courage, bravery and heroism. At least for us, this certainly has been true.

We have come to believe that it is the every-day choices and actions of ordinary people that make and shape the world in a positive way. And although it’s not immediately apparent, grandiose or loud in a unanimously apparent way, it certainly proves to be powerful in the long-term future.
Not to take anything away from the brave examples, but society is not just shaped by those grandiose acts. Human Civilization by and large, runs smoothly due to the hard-work of good, ordinary people on a daily basis. Often times, such people show displays of silent courage that no one is there to witness, applaud, acknowledge or even notice. Yet those acts are still performed consistently.

“He shall work in the dark, work against failure, pain and ill-will. He learns the greatness of humility.”

Over the course of our lives, we have come to respect and live by the kind of courage found and cultivated by such ordinary individuals. It is different in nature than our brave examples, albeit ultimately, we would argue, are almost as powerful. It is different in that it is quiet, almost silent in nature. And usually, people who perform such silent acts of courage do not look for attention nor adulation.

It is the kind of courage that is required to get up day after day without prospects and still give it your best shot. Waking up to setbacks and disappointments and still taking action to make things just a little better. Waking up knowing that the day could be full of threat, danger, uncertainty and chaos, and still going through with it. As Ralph Waldo Emerson put it eloquently, ordinary people usually have to work in the dark, work against failure and setbacks, work with pain, and sometimes, against ill-will. And what’s more, there is usually no one to give the much-deserved adulation to them, despite their work being highly valuable to the world.

This insight gives us hope that every ordinary individual can find and cultivate this kind of courage to face life head on, rather than shrinking back from the inevitable storms of life. From our own experiences, we have learned that it can only be found and cultivated within. We hope to and intend to make the most of it as long as we draw our breaths.

The spirit of the company

Just like everyone, we have endured quite a few crises in our lives, big and small. Introspecting on each of these, we were convinced that our identity and spirit was forged through all the crises that we have endured up until now. Each of those experiences of crisis, has made us realize and believe in the importance of leaving each day, each hour, each moment, with courage. Although not always perfect, the effort makes us better human beings. Its importance is especially brought home during times like these, when courage is in short supply.

If we were asked to define that one fundamental aspect that could be understood as the spirit of the company, it would be this kind of courage, that spirit, that essence that drives us. Every human being longs and gropes for something certain in an uncertain world. For us at Khiswa, understanding and respecting the spirit of this silent courage is what gives us a profound sense of meaning. It gives us something certain and powerful to hold on to, in this chaotic, unpredictable world.

Afterall, what would human civilization look like, if people hadn’t taken courageous action each day throughout human history, throughout their lives?

Real courage can only be found and cultivated within. Its power grows with its exercise through the passage of time.

About Us
Home
Explore Shop

Get 15% OFF on your first order from Khiswa

Inside access to our new collections, exclusive sale & more